Anthropogenic seismicity rate and magnitude are tested against non correlated series with the same number of data. It is achieved by "reshuffling" the data. It is a robust way to check how significant is the variability over time of anthropogenic seismicity. Input data are time series from seismicity catalogue. This application is important to quantify the robustness of observed seismicity pattern against random fluctuations of the same size system. Outputs are observed and reshuffled time series.

CITATION Please acknowledge use of this application in your work:
IS-EPOS. (2017).  Earthquake swarm: reshuffling analysis  [Web application]. Retrieved from https://tcs.ah-epos.eu/

Every Anthropogenic episode may highlight changes in either rate or magnitude that possibly correlate in time with change in production (or geo-resource operations) patterns. The service primarily tests if the seismicity changes we observed is significant as tested against reshuffled series with the same number of events, in the same range of value (e.g. Lemarchand and Grasso, 2007, Tahir et al. 2012, De Arcangelis et al. 2016). It allows to accept or to reject the change at a given (e.g. 95%) confidence level.  It corresponds to Monte Carlo techniques (e.g. Kelly and Sear, 1984; Lemarchand and Grasso, 2007, Tahir et al. 2012, De Arcangelis et al. 2016, Grasso et al. 2018), involving 1000 random sets of key events. This is assessed by random sampling, (including bootstrap procedure), 1000 sets of "synthetic event catalogues". The 1000 sets of synthetic catalogues are then analyzed in the same manner as the real seismicity catalogue to assess the confidence levels for the observed episode distribution.This application is important to quantify the robustness of observed seismicity pattern against random fluctuations in the same size system.
References:
- De Arcangelis, L, Godano, C, Grasso JR, and E Lippillo, (2016).  Statistical physics approach to earthquake occurrence and forecasting, Physic Reports,
- Grasso, J-R,  A. Karimov, D. Amorese, C. Sue, C. Voisin, (2018) Patterns of Reservoir‐Triggered Seismicity in a Low‐Seismicity Region of France. Bulletin of the Seismological Society of America doi: https://doi.org/10.1785/0120180172
- Grasso, J.-R.  A. Karimov, D. Amorese, (2019), Anthropogenic Seismicity as aftershocks of geo-resource production ? Implication for Mmax  estimates, reservoir impoundment case, GJI , revised
- Tahir, M., Grasso, J. R., & Amorèse, D. (2012). The largest aftershock: How strong, how far away, how delayed?. Geophysical Research Letters, 39(4).
- Tahir, M., & Grasso, J. R. (2015). Faulting style controls for the space–time aftershock patterns. Bulletin of the Seismological Society of America, 105(5), 2480-2497. https://doi.org/10.1785/0120140336

After the User adds the Application into his/her personal workspace, the following window appear on the screen (Figure 1): 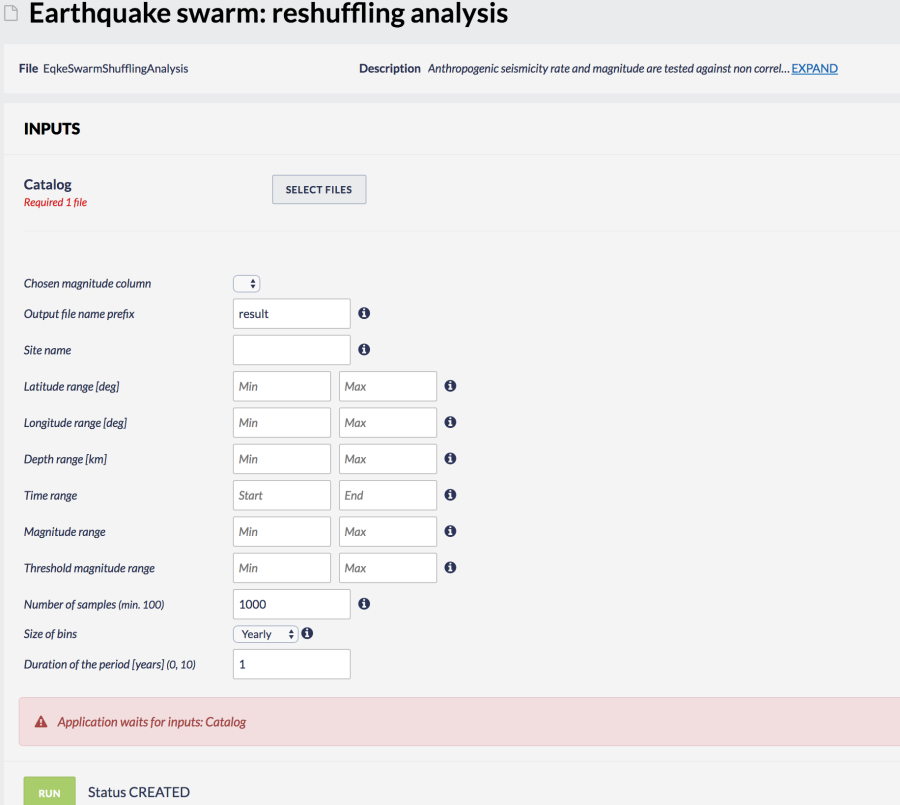 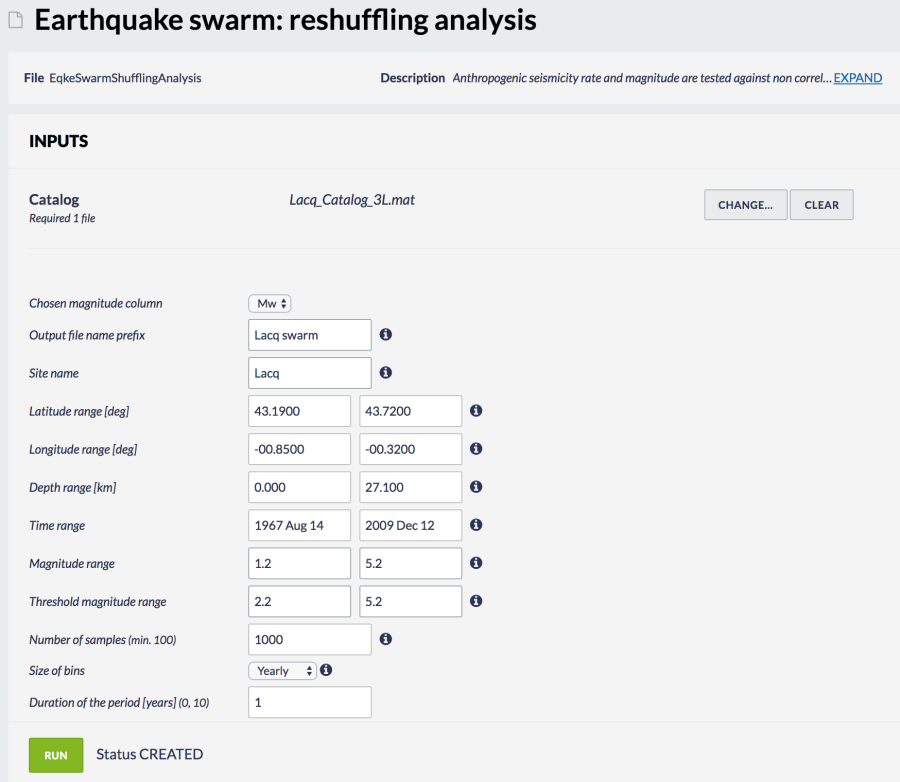 Figures #3 and #4 describe the outputs of the LACQ field swarm analysis. Blue curve is the seismicity rate over time, for given magnitude range. We observe an increase in the 1980-1990 period relatively to period after and before. We compare the LACQ field swarm pattern to reshuffled time series (brown line). Shaded area are 2 sigma values for observations and reshuffled series. Only the 1990 peak value is above the 95% confidence level deduced reshuffled synthetic data. It allows to estimates, at a 95% confidence level when real series overpass the shaded area thresholds. 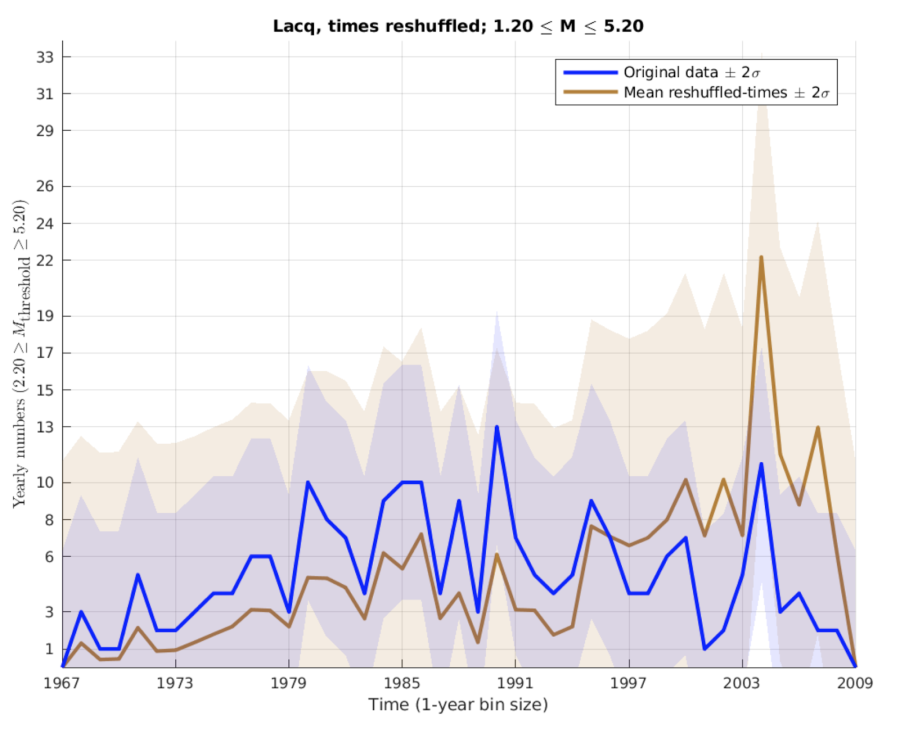 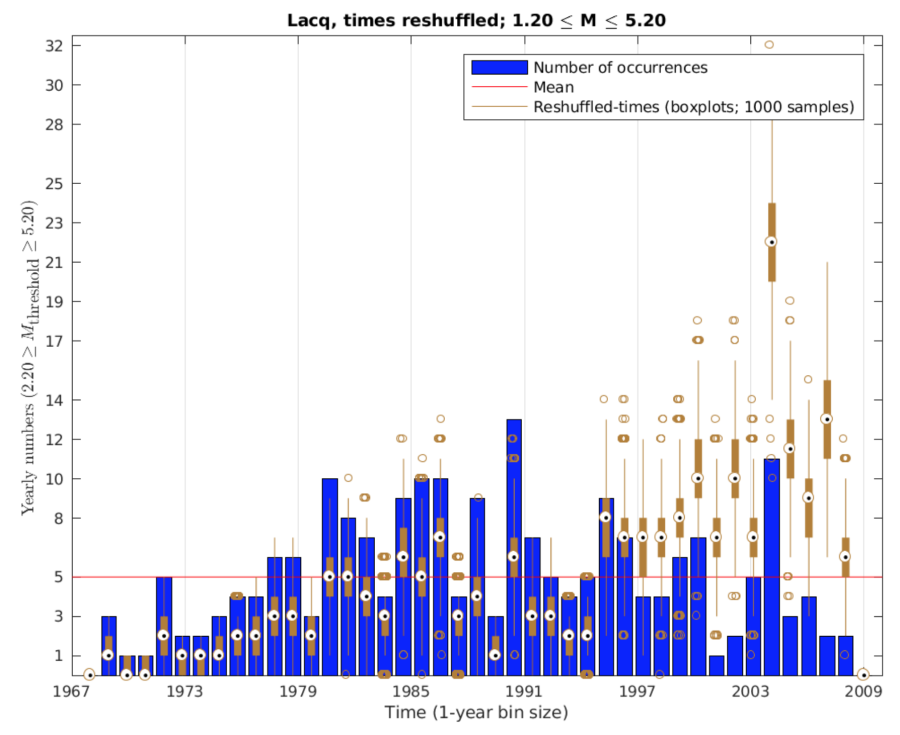