Test of of Number, space, and Magnitude pattern against reshuffled distribution in time e.g daily patterns for mine induced seismicity or monthly pattern for reservoir induced seismicity. The test aims to quantify how “seasonal” patterns remain uniform over time and to accept or to reject the uniform pattern under a given confidence level. Allows to capture anthropogenic trends in time pattern that correspond to georesource production type. It allows to extract time relationship to production patterns and departure from uniform tectonic seismicity background.

The service use superposed epoch analysis to extract seasonal patterns in seismicity time series and it tests the result robustness against reshuffled series. One key time patterns of anthropogenic activity relatively to tectonic events is temporal driven by production history. When seasonal patterns for geo-energy production are known, we test in the application how these patterns impact the time series of anthropogenic seismicity.  The users choose to test the time pattern of seismicity on a window that corresponds to the rhythm of georesource production (e.g. the hourly or daily basis for mining or fluid injection fracking); or monthly patterns for reservoir water level (e.g. Mekkawi et al. 2004), oil and gas production). The service further tests if the time patterns that are observed are significant as tested against reshuffled series. The reshuffled series are imposed to have the same number of events, in the same range of value (e.g. Lemarchand and Grasso, 2007, Tahir et al. 2012). It allows to accept or to reject the observed seasonal trend at a given (e.g. 95%) confidence level. It corresponds to Monte Carlo techniques (e.g. Lemarchand and Grasso, 2007, Tahir et al. 2012, Grasso et al. 2018), involving 1000 random sets of key events. This is assessed by random sampling1000 sets of "synthetic event catalogues" (including bootstrap procedure). The 1000 sets of synthetic catalogues are then analysed in the same manner as the real seismicity catalogue to assess confidence levels for the observed episode distribution.
Reference:
- Grasso, J.‐R., A. Karimov, D. Amorese, C. Sue, C. Voisin, (2018) Patterns of Reservoir‐Triggered Seismicity in a Low‐Seismicity Region of France. Bulletin of the Seismological Society of America doi: https://doi.org/10.1785/0120180172
- Lemarchand, N., and J.-R. Grasso (2007), Interactions between earthquakes and volcano activity, Geophys. Res. Lett., 34, L24303, doi:10.1029/2007GL031438.
- Mekkawi, M. J-R Grasso, and P Schnegg, 2004. A long lasting seismic relaxation at Lake Aswan, Egypt, 1982_2001, Bull. Seis. Soc. Am. 94, 2, 479-492.
- Tahir, M., J.-R. Grasso, and D. Amorèse,(2012) The largest aftershock: How strong, how far away, how delayed? Geophys. Res. Lett., 39, L04301, doi:10.1029/2011GL050604

After the User adds the application to his/her personal workspace, the following window appears on the screen (Figure 1): 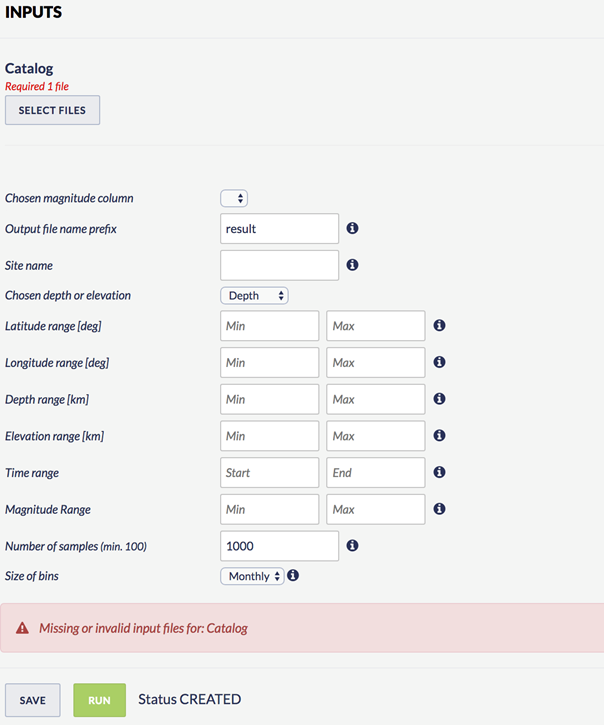 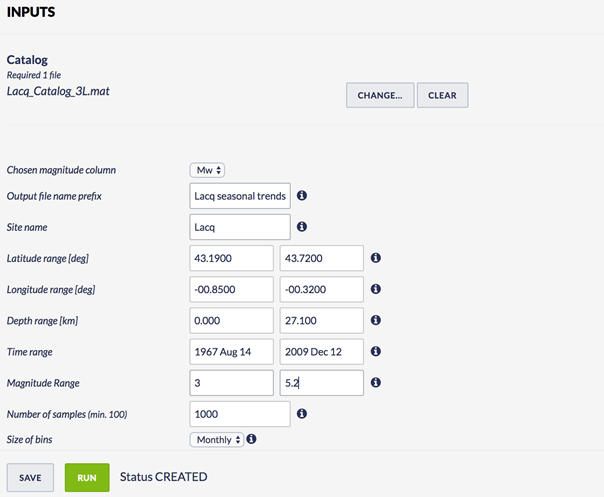 Figure 3 describes the outputs of the LACQ field seasonal trend. Original data and monthly earthquake stack are displayed as green bars, while the average value of green bars are shown as a red line. A synthetic dataset is used to see how sufficient (strong) original monthly earthquakes are.
Boxplot is used for synthetic dataset results. Thick and thin vertical blue bars are one and two sigma fluctuations estimated from the variability of the N synthetic series. It allows to estimate the 66% and 95% confidence level, respectively, when real series overpass these thresholds. 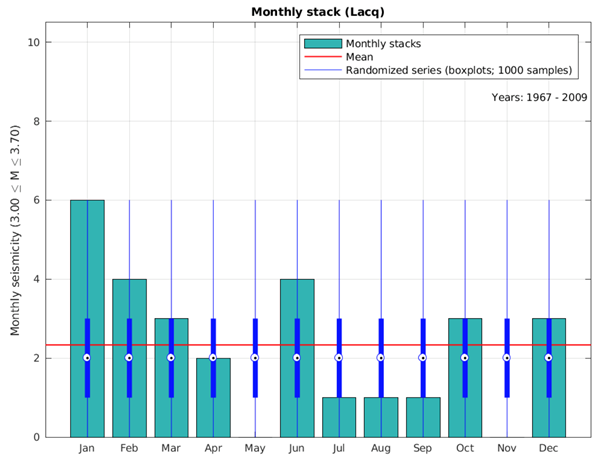