This application implements a location procedure which allows imaging the distribution of seismic sources in both time and space. First, a characteristic function (CF; in this case, the STA/LTA ratio) is calculated at all the vertical-component seismograms from the selected stations. The user then define a volume likely containing the source(s), and a number of grid nodes along the two horizontal (NS-EW) and vertical coordinates for discretising this volume. For each grid node located at the arbitrary location (x,y,z), the predicted arrival times are calculated at all the stations, and the different CFs are time-shifted consequently. By stacking these time-shifted CFs one obtains a time-dependent Brightness function associated with that particular grid node. The procedure is iterated over all the grid nodes of the source volume; at the end of the process, the maximum (maxima) of the Brightness function will provide an estimate of the source location and origin time. The main advantage of this procedure is that it exploits waveform information (both arrival times and relative amplitudes) without the need of pre-assembled phase-picking data. The method, therefore, is particularly well-suited for emergent signals and/or for real-time applications. The technique has been largely inspired by the previous works from Kao and Shan (2004), Grigoli et al. (2013, 2014), Langet et al., (2014), to which the reader is referred for a more comprehensive description of the methodology.

CITATION Please acknowledge use of this application in your work:
IS-EPOS. (2019). Waveform-based seismic event location [Web application]. Retrieved from https://tcs.ah-epos.eu/

This application implements a location procedure which allows imaging the distribution of seismic sources in both time and space. Using the predicted arrival times for a set of trial locations and origin times, the code calculates a brightness function by stacking a characteristic function observed at all the stations. The spatial and temporal distribution of sources is then identified by a systematic search throughout the model space and time for the maximum brightness. The main advantage of this procedure is that it exploits waveform information (both arrival times and relative amplitudes) without the need of pre-assembled phase-picking data. The method, therefore, is particularly well-suited for emergent signals and/or for real-time applications. The technique has been largely inspired by the previous works from Kao and Shan (2004), Grigoli et al. (2013, 2014), Langet et al., (2014), to which the reader is referred for a more comprehensive treatment of the methodology.

Consider a seismic source positioned at x0 acting at time t0 and radiating a wavefield which is recorded by N receivers located at x. This signal is observed at the i-th recorder at the time t=t0+T(x0, xi), where T is the source-to-receiver travel time.
Now consider a characteristic function CF(t) which results from a transformation of the original signal u(t) aimed at enhancing the energy of the incoming signal, in turn alleviating the waveform distortions due to path and source effects. A brightness function (Kao and Shan, 2004) is then defined as the stack of the time-shifted CFs:

which also corresponds to the standard beam-forming estimate for the case of arbitrarily-shaped wavefronts. From eq. (1), it is obvious that the B(t) function will attain a maximum when the time shifts xi applied to the CFs from individual stations correspond to the actual travel times from the source. The procedure begins by parameterizing the volume which is supposed to contain the source(s) with a regular grid of M nodes located at X; travel times T(X, x) are calculated from each of these nodes to all the stations, and stored for subsequent use. Then, an exhaustive grid-search is conducted throughout all the nodes of the mesh: for each tentative source location, the CFs from all the stations are migrated (time-shifted) by the predicted travel times for that node, and then stacked to create a brightness function which is function of time and space (Fig. 1b):

Whenever the time t and grid node position X correspond respectively to the actual origin time and source location, the CFs will sum in phase thus yelding a maximum for B(t,X).
The procedure is eventually repeated using S-wave travel times, so that a final brightness function is obtained from multiplication of the two individual brightnesses (Grigoli et al., 2013; 2014): 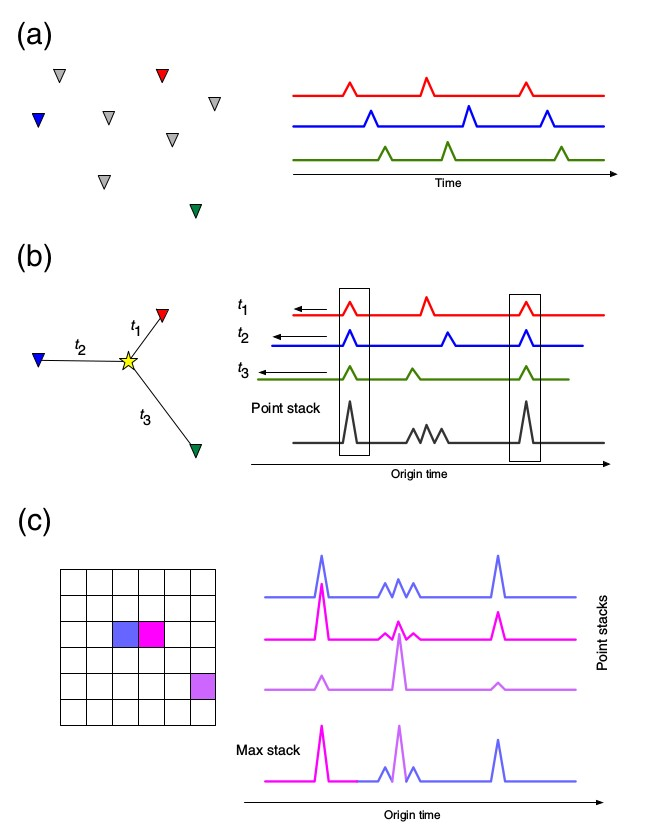 Figure 1. Schematic diagram of the application. (a) Data processing: calculation of an appropriate characteristic function to maximize sensitivity to the presence of seismic events. (b) Migration: the processed waveforms are shifted back in time according to the predicted travel times from a potential hypocentral location, and then stacked. This procedure is repeated for a 3D grid of potential locations, and for both P- and S-waves travel times. (c) At each time step we store the maximum of the point stacks and the location it corresponds to, thereby allowing simple detection and event location.

For each trial source j

For each receiver i

Calculate the theoretical travel time TSij for S-wave as TPij /1.73

For each time sample k

search the location Xmax at which B(tk, X) takes a maximum, and store those time- dependent coordinates of maximum brightness as B'(tk, Xmax).

The User can obtain required SAC files via data conversion as well as by uploading them into his/her workspace from his/her computer.

Figure 2. Adding waveform to the workspace. 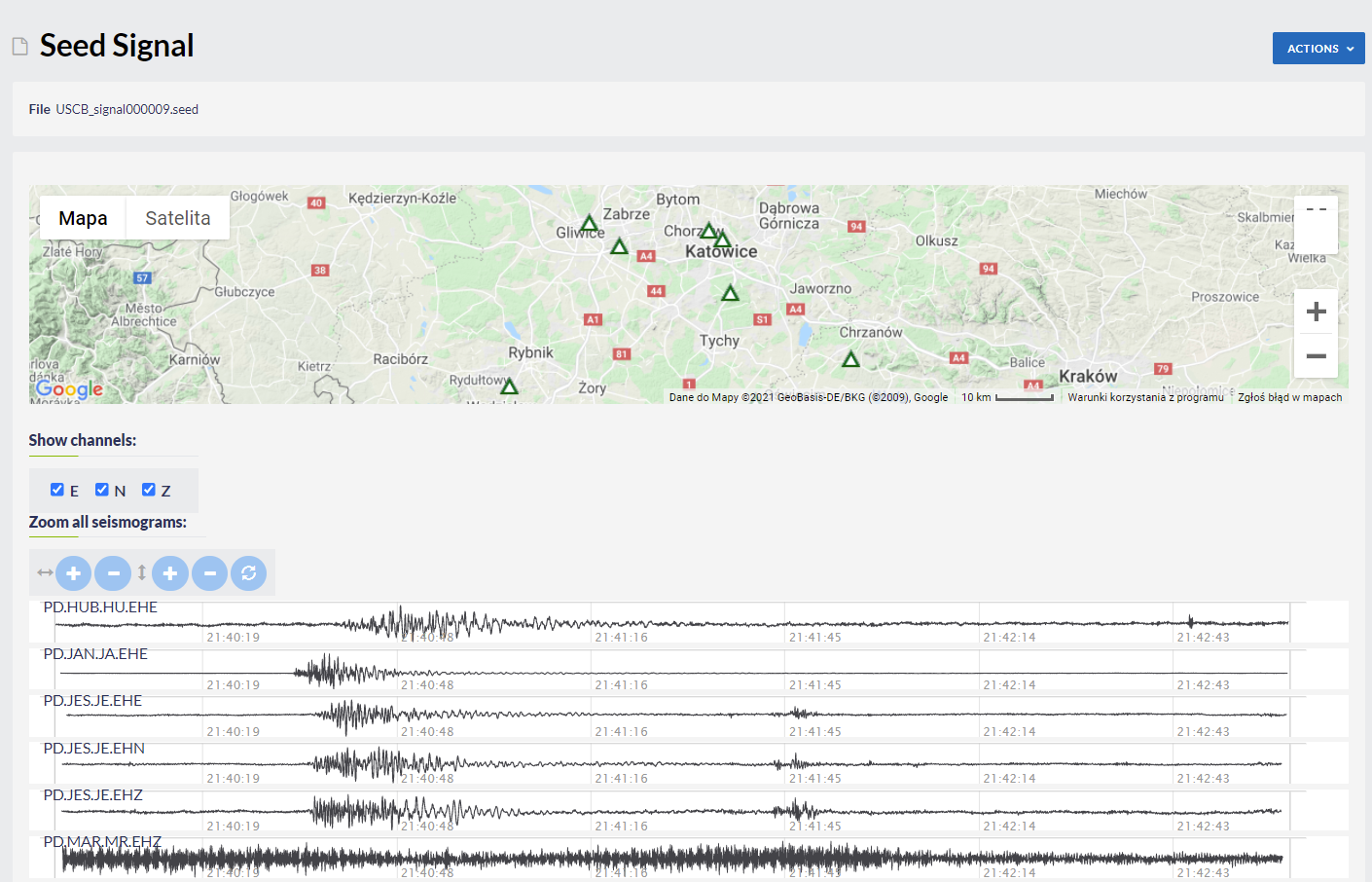 Seismograms are contained in a seed volume which, for being used in the Waveform-based seismic event location, must be converted to a series of single-channel SAC data files.

WARNING: the format conversion also implies reading of station coordinates from the seed volume (extension .seed), and their writing into the SAC data files header. If the original file is a miniseed volume (extension .mseed) rather than a full seed one, it will not contain stations metadata, and therefore the resulting SAC data files will miss that information and the location procedure will fail.

Figure 4. Performing conversion into SAC with the 'SEED to SAC converter' application.

Adding the application to workspace:

Sources are sought over a volume whose corners at the Earth’s surface are given by [latmin, lonmin] and [latmax, lonmax]. The volume extends from zmin to zmax kilometers beneath the sea level. This volume is then discretised with a mesh of regularly-spaced grid nodes. [nx, ny, nz] indicate the number of grid nodes to use along the longitude, latitude and depth directions, respectively. The higher the number of nodes, the better the possible source(s) will be resolved. At the cost, however, of longer computational times. It is strongly recommended not using number of grid nodes larger than 50-70 along the three directions. To have an idea of the final resolution, just consider an example in which your grid extends along the NS direction by one degree, and that you choose ny=50. Since the length of a latitude degree is on the order of 110 km, your grid nodes along the NS (y) direction will be spaced by about 110/5 = 2.2 km. The same holds for the EW (longitude) extension of the grid, with the difference that the length of a longitude degree depends on the latitude. The grid must encompass the potential source volume, it is necessary an a priori knowledge about the possible location of the signals under examination. If a catalog is available for the selected episode, then you can use the extreme values for latitude and longitude as provided in the informative page of the catalog (Figure 7). If a catalog is not available, a good choice is to use a volume whose horizontal projection includes all the stations which are going to be used in the calculation.

These are the length of the time windows for calculating the short- and long-term averages of the seismograms. There are no obvious choices for setting these values. In general, one wants the STA/LTA ratio to highlight the main phases (P, S), in turn suppressing both the noise preceding the signal of interest and the coda waves following both P and S-wave arrivals. A reasonable choice is to set both wl and ws shorter than the S-P differential time, with a wl / ws ratio on the order of 5. Figure 8 illustrates the effect of different choices of ws and wl. 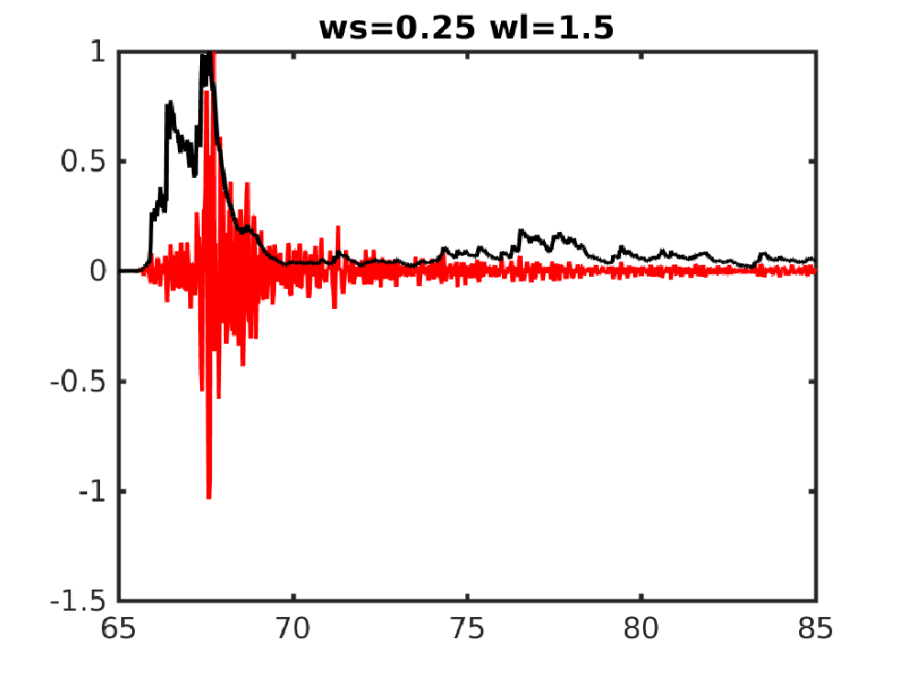 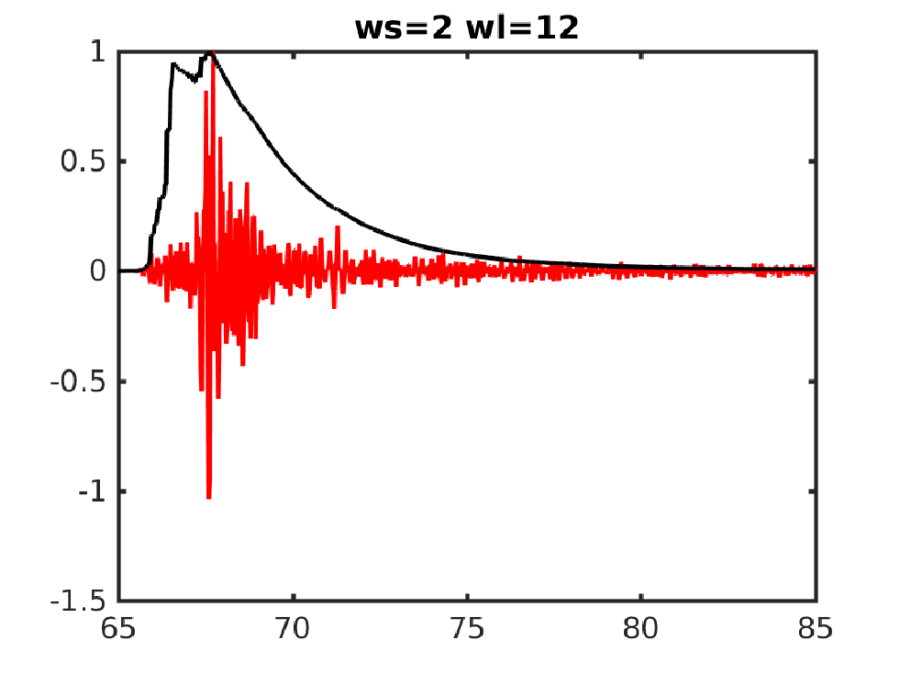 Figure 8. Effects of different window lengths on the calculation of the STA/LTA function. While being noisier, shorter windows preserve details of the main body-wave arrivals.

R option: the output is saved as an ASCII file with 4 columns: time, x,y,z location of the grid node taking the largest brightness at that particular time. 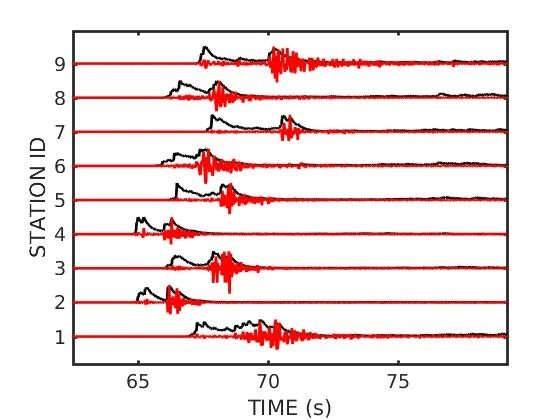 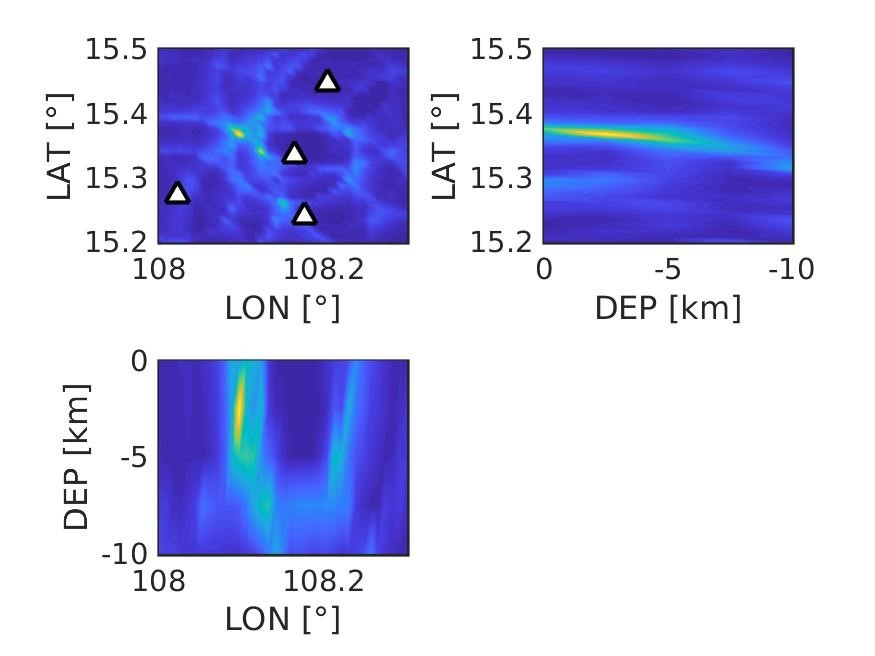 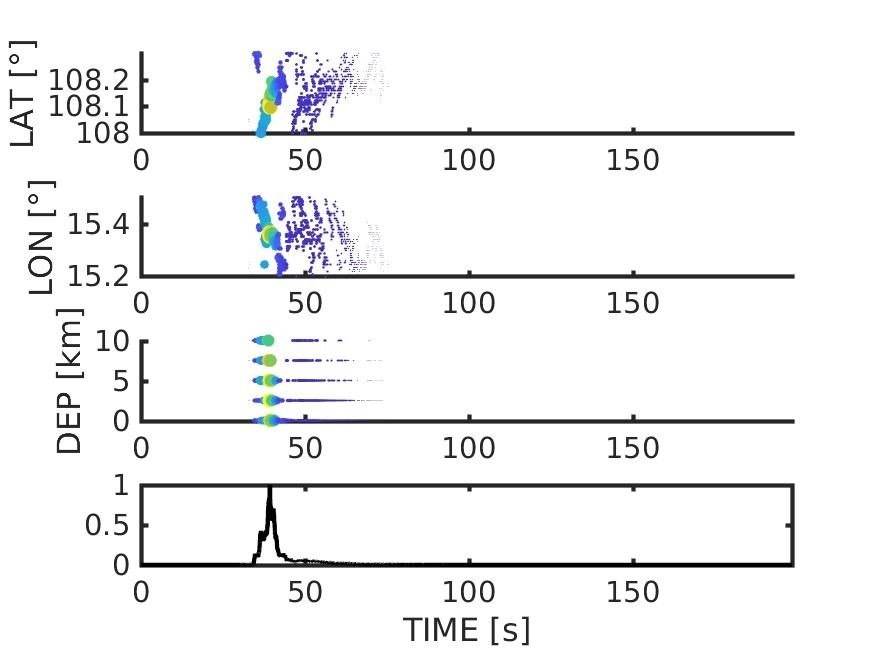